It was lovely to visit the first granite sculpture that I have ever made last weekend. It was a commission for Mountsorrel Quarry to commemorate the opening of the old quarry to the general public back in 2009 (ish).

As I sat opposite the granite quarry manager in his Leicestershire office, my eye was taken by a black and white photograph of a quarry worker, wielding a hammer and shaping a stone. The flat capped grafter was later identified as former Mountsorrel resident Albert and he worked at the quarry up until the outbreak of the First World War. The photograph, was to be inspiration for the work. A short trip to the stone stone pile brought about an unusual occurrence. Generally, a quarry visit can last for some time as you sift through hundreds of tonnes of stone, trying to identify the perfect rock for your stone carving project. This was different. There it was, rising from the assembled pile of giant granite boulders, this was going to be “Albert”. It was delivered to my workshop a few days later and I set about carving my first granite sculpture.

Subsequently I have carved a number of large scale granite works with completed projects including the cricketing memorial sculpture Blaby,  a series of animals and flowers in Quorn and most recently the World War 1 memorial underneath the Clock Tower in Coalville, Leicestershire. Of course granite requires a completely different tool kit to your average stone sculpture. More power tools, many more blades and a very different set of chisels. The main benefit of creating a granite sculpture is that it will survive for centuries rather than decades like some of the other stone pieces that we create. This beastly stone will look as good in 200 years as it does today, as was the case when I called in to visit “Albert” at the weekend. No damage, no moss, just a very durable quarry worker, immortalised for at least a few hundred years. 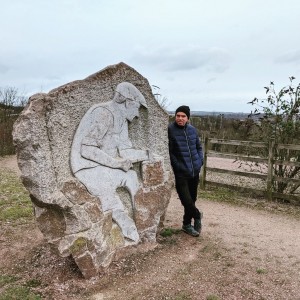 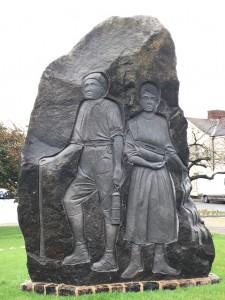