I am making good progress on my latest giant stone sculpture.

The sculpture takes the form of a giant pair of hands. It weighs in the region of around 8 tonnes having weighed in at a whopping 14 tonnes when it was delivered to my Leicestershire workshop in December.

Despite the dreadful storms over the last couple of weeks, conditions have generally been good for working outdoors. I started work on the hands, firstly by making a 1:10 scale model, also in stone although I sometimes make these in clay. From that I was able to project up onto the full sized stone blocks and was confidently able to remove some large chucks of stone early on. I started with a drill. By drilling a series of holes close together, I was able to accurately split large pieces from the main block. Since then, I have been working with angle grinders, pretty much constantly for about 6 weeks to the point that it is at now in the image. The photograph shows me celebrating picking up some hand carving tools for the first time this year!

As you can see, I am now able to sit inside the giant stone sculpture. This has proved to be the trickiest part of the sculpture. If leaning over or climbing into the artwork to carve it wasn’t difficult enough, I am also finding that the bowl effect created by the hands acts to collect water and dust resulting in a lot of slurry which constantly needs to be swept, brushed or scooped out. Ideally a spot of dry weather now will help to resolve this and make the carving of the bottom of the hands a lot easier.

20 pieces of stone have been used to construct the giant stone sculpture. A band of red St Bees sandstone is sandwiched between layers of buff coloured stone. It is designed this way so as to replicate the construction of the building next to where it will finally be sited later this year. A couple of weeks of dry weather will be required to finish this sculpture before it can be stored prior to installation, probably in the summer. 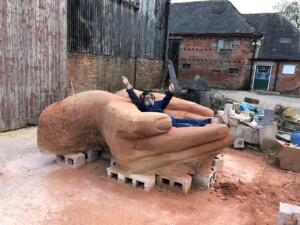