I have been working on a giant Human stone sundial for some months. Although work was temporarily postponed due to carrying out the work on the Scout Memorial Project, I have now been able to complete the carving of the 22 stone giant timepiece. The stone sundial has been commissioned by the Woodland Trust and will be situated in the Jubilee Wood near Normanton le Heath near Coalville in Leicestershire. The stone sundial is made up of 20 sandstone blocks, each with a leaf or flower representing the country towards which it faces, it also has carved into it the name of the country and its distance in miles. The central stones are where the viewer must stand to cast the shadow. Depending on the time of year there is a different position marked. Their shadow is then cast in the direction of a sandstone block which reads the time. All good in theory, lets hope that it works in practice when it is installed at the beginning of August. More pictures to follow. 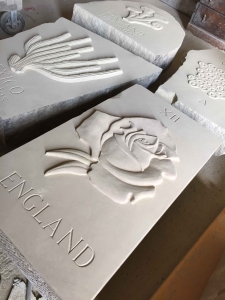