In 2016, I was approached by the Queen’s Lancashire Regiment and asked to help with the design and construction of a memorial that was to commemorate all those who served in their Regiment. They were very specific, the memorial was to be situated at the National Memorial Arboretum in Staffordshire and dedicated on the 23rd of March 2020.

So the memorial underwent a lengthy design process, finalising the intricate details that were so important to the Regiment and ensuring that the memorial was eye catching and informative. We settled on the design, secured approval from the National Memorial Arboretum and  finally began construction in the summer of 2019. A dedication ceremony was arranged with 600 people due to attend on  the 23rd March 2020 as we had planned all along with the final elements of the construction due to be completed just a few days before the unveiling . Then, devastatingly, Covid 19 struck. The event was initially moved to September and eventually cancelled indefinitely. The decision was then taken to complete the final installation and allow public access to the memorial.

Last month, we completed the work  and a handful of the regiment were present to mark the moment of completion. Thanks to Proto Studios for their work on the glass and to Yorkshire Fine Arts for their bronze regimental badge. The 3m long glass element is a replica of the Queen’s Lancashire badge while the mounted bronze badge is a replica of the cap badge worn by the Regiment. The QLR motto’s are inscribed into the granite paving while the location of a time capsule, buried in 2019,  is also marked.

The Queen’s Lancashire Regiment and the National Memorial Arboretum are delighted with the completed memorial which sits in the shadow of the stunning Armed Forces Memorial. Definitely worth a visit if you haven’t done so already. 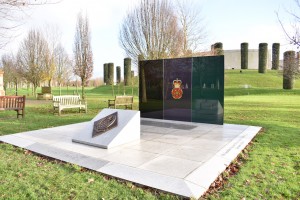