Sculptures at the National Memorial Arboretum

10 years of sculptures at the National Memorial Arboretum.

In 2011, I was approached by a lovely elderly gentleman called Harry Parkes. He asked if I would be prepared to make a memorial to the Bevin Boy miners which would be sited at the National Memorial Arboretum in Staffordshire. Harry had been a former Bevin Boy and was frustrated at the lack of recognition the Bevin Boys had received following their conscription to work down the pits by Lord Bevin during WWII. The goal, to have a memorial to all the men who gave years of toil, and in many cases their lives, to the war effort. This was the first time that I had heard of the National memorial Arboretum and it wouldn’t be the last.

Over the last 10 years, I have created 8 sculptures at the National Memorial Arboretum. Large memorials have been the glass Naval Service Memorial and the Scouts, I also created pieces for the Queens Lancashire Regiment, The Soroptimists, The Guinea Pig Club, the NAAFI and the Parachute Squadron.

During that time the National Memorial Arboretum has grown at a pace, with over 25 new memorials per year being added to the vast landscaped site in Staffordshire. An impressive new visitor centre has also been created while recognition nationally has really taken off.

I take great pride in all of the memorials that I have been asked to create wether that is for the giant coloured glass Naval Service Memorial that dominates the Naval review area of the arboretum or wether it is for the modest Parachute Squadron memorial which was a relatively small stone sculpture but still meant so much to a lot of people. It has been an honour to work with so many people from all of the organisations who have commissioned a memorial sculpture. I am usually asked to be involved because the organisation are seeking an artwork that is a little different from some of the more traditional memorials that you may find. I always try and find a unique angle, a distinctive design or shape that will make their memorial stand out from the many others that catch the eye, even with some of the smaller works. I like to think that I have achieved that. I know Harry Parkes was delighted with the memorial that we created together 10 years ago. 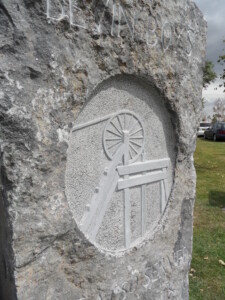 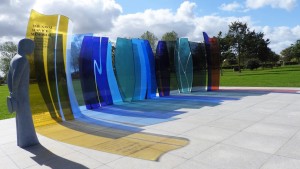 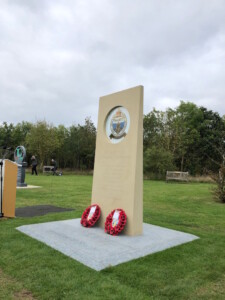 The Bevin Boys, the Naval Service and the Naafi memorials at the National Memorial Arboretum.