The railway sculpture that I have been working on for a couple of months is due to be installed in the coming weeks.

The stone sculpture, carved in relief weighs 5 tonnes, is almost 2m high and 2m wide. Inspiration for the artwork was taken from Leighton Buzzard light railway where the volunteers have sought to keep the track operating since it’s demise as a commercial line when it formerly served to move gravel and sand from local quarries. The railway is now a popular tourist attraction and operates out of a small station and railway sheds near the town centre. The stone sculpture depicts 2 volunteers working on an engine which would have been one of the original trains working on the line.

The sculpture is carved in deep relief into Woodkirk sandstone and used some of the original face of the stone to replicate the steam emanating from the chimney of the light locomotive.

Installation will be in the coming weeks and I will post pictures of the completed stone sculpture on this blog. 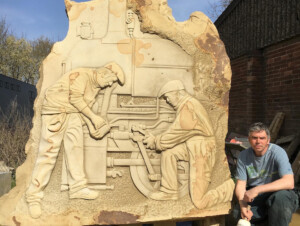