Graeme Mitcheson has been creating stone sculpture since graduating from Loughborough College of Art in 1995. He undertakes a wide variety of work including major public art sculpture, smaller private commissions, memorials and lettercutting work. Graeme has work sited in the public realm all over the UK including sculptures in Belfast, Northumberland, North and South wales. Graeme also runs stone carving courses and workshops in schools. Images of Graeme’s work can be found in the gallery while details of Graeme’s current projects as well as upcoming dates for stone carving courses and exhibitions can be found on his blog. 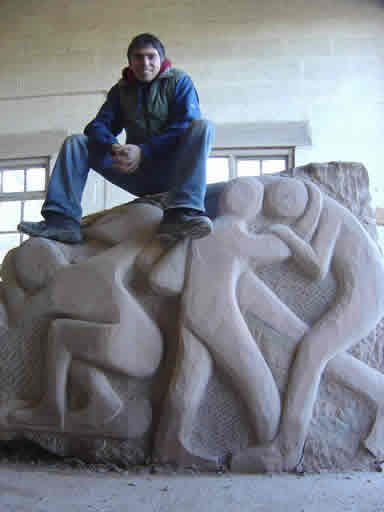 I am a sculptor primarily working in stone to create public art sculpture as well as smaller works for private clients and residencies in schools. My work is nearly always site-specific and often, I will engage the public or schools in the creative thinking process when formulating ideas for a piece. I try to create tactile, eye-catching artworks that engage the viewer on a number of levels. The influences running through my work are quite varied though much inspiration has been taken from the natural world. Other influences have been the paintings of Henri Rousseau and the sculpture and lettering of Eric Gill as I appreciate many of the values of traditional stonework but try to incorporate them into my work in a more contemporary way. For the public realm, each sculpture is individually influenced by the environment and the people around where it is to be permanently sited.

Since graduating from Loughborough College of Art in 1995 I have been creating significant public art sculptures. Initially working alongside artists such as Richard Perry and David Haigh, I gained valuable experience. Since then I have created public art pieces all over Britain as well as carrying out numerous residences in schools and colleges. My first significant individual commission was for Astra Zenica Pharmaceuticals in Loughborough where I created “Cures”, a 2-metre tall, hollow white limestone column with a spiraling inscription of more than 3000 carved letters. Since then, other major works have been an 8 tonne granite Millennium sundial in Leicestershire; four sculptural seats for New Walk in Leicester, an ancient walkway into the heart of the city and a 3 metre tall piece for Conwy Quay in North Wales which is a world heritage site. Recently I was honored to create a sculptural memorial to former England football manager Sir Bobby Robson, sited in the centre of Newcastle upon Tyne and in 2015 I completed a major memorial for the Naval Service at the National Memorial Arboretum.

2015 Memorial for the Scouting association at the national Memorial Arboretum, Staffordshre.

2013 Commission for a new Santander premises in Narborough, Leicester.

2013 A sculpture of an attacking knight for Caerphilly Castle, commissioned by Cadw.

2013 Gateway earthwork for an embankment on the approach into Lutterworth, Leicestershire.

2012 Commission for a redeveloped Tesco site in Bedworth, Warwickshire.

2006 10 entrance features for a Central Park, Newbiggin by the Sea, Northumberland.

2005 Sundial for a heritage site at Hafod Colliery near Wrexham.

2004 Life size carved stone bust of Sir Isaac Newton, sited in one of his former homes in Lincolnshire.

1995 2 Sculptures for the Courtyard of the Ferrers Centre at Staunton Harold, Leicestershire.

2015 Workshop with A level sculpture students at Wyggeston School in Leicester.

2010 The Ferrers Centre for Arts and Crafts as part of the Made in Leicestershire exhibition.

1995 Worked as an assistant at the National Stone Carving Symposium in Sheffield.

2015 Invited to a Buckingham Palace garden party in recognition of the work on the Naval Service Memorial.

2014 Made an honorary member of the Royal Naval Association for work on their Memorial.